This is the personal website of Rohit Nafday. Originally intended to host an online résumé, it now serves as a catch-all location for all static content I feel compelled to post to the web. 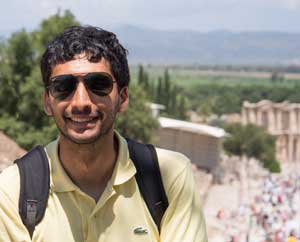 One fine afternoon thirty odd years ago, I arrived upon this planet, bright-eyed and bushy-tailed, fully prepared to embark upon a journey of assured futility. My parents named me Rohit, which in Sanskrit refers to the reddish rays of light at sunrise or sunset. Ironically, I would quickly become known for reveling in the darkness of modern existence.

I spent the first four years of my life in Baltimore, MD, followed by brief, but glorious stints in Irvine, San Ramon, and Seal Beach, CA, before returning to Irvine to complete high school. I graduated from University High School around the turn of the century, and soon thereafter, moved to Berkeley, CA, home of the hippies, heretics, and homeless, to attend the University of California, Berkeley (Go Bears!).

At Cal, I studied Electrical Engineering & Computer Science and Molecular & Cell Biology (emphasis Genetics). Some of my prominent activities on campus included working as: a CalSO Counselor; a Resident Assistant; and first a Programmer, and then, Lead Programmer, at what was then known as Residential Computing (and now is known as Student Technology Services).

Upon graduation, I found a place in the vast expanse colloquially known as corporate America, working as a consultant based in San Francisco, CA. Two years later, having added inordinate amounts of value through utterly unremarkable activities, I emerged from the corporate world to embark upon a lifetime of potentially crippling debt and dubious career prospects—to attend law school, that is.

My mid twenties were spent in Chicago, IL, at The University of Chicago Law School, an institution affectionately known by its students as the place where fun goes to die. In addition to learning copious amounts of law that will likely bear no relation to anything I ever undertake as an attorney, I also spent time as: a member of the Wine Mess Committee; an articles editor for the Law Review; and a part of the Exoneration Project, a clinical program dedicated to representing clients who have been convicted of crimes of which they are innocent.

Following graduation and armed with a JD, I moved to New York, NY, to reenter corporate America. And that’s where I find myself today. It really does not get any better than this.

This site dates back to 2004. Though I purchased the domain name in November 2003, it was not until a year later that I decided to add content. I had originally intended that the site serve as an online résumé of sorts, but that idea was eventually scrapped in favor of creating a general personal page.

The first release of the site contained a basic design and only static content. Over the years, I have tried to maintain this minimalist ethos. The site is still entirely static and actually contains fewer pages today than at the time of its initial launch. In December 2007, I overhauled the site and redesigned it, with significant tweaks to that design made in September 2010 to incorporate an elastic layout for increased accessibility and usability.

The December 2007 design would propel the site forward for a decade. In the fall of 2017, I redesigned the site again to incorporate the latest web technologies, notably HTML5, and released the new design in October 2017. That is the version your are viewing right now.

Though content and design of this site are entirely my own work, I owe a significant debt of gratitude to a number of extraordinary tools, largely open source, that have made web development and design a (relatively) painless experience.

This website is hand-coded using HTML5 and CSS3, and all pages should validate for both technologies. Primary development occurs in GNU Emacs on a FreeBSD workstation, and both Template Toolkit and Perl are used liberally to build, test, package, and theme the site.

The site is hosted on a colocated server and served using Apache. Although best viewed in a modern, standards-compliant browser with a screen resolution of at least 1024x768, the site employs a responsive design that should degrade gracefully.

Bug reports are always welcome—contact me—but I will tell you now that if the problem is a consequence of you using some hopelessly outdated and consummately inadequate version of Internet Explorer, there is little I will be able to do except suggest you get a better browser. Believe me, I have tried making things work with Internet Explorer; it’s a futile enterprise.